Should You Worry About Heart Murmurs in Dogs?

When you are told that your dog has a heart murmur, it can be a really distressing time. However, there are many causes of a heart murmur in dogs. While it could be a symptom of a disease that requires treatment, it could also be something that ends up being really quite insignificant and can disappears over time.

What Are Heart Murmurs in Dogs?

Dog’s hearts beat at a regular pace as blood is pumped through their bodies. When a veterinarian uses a stethoscope to listen to your dog’s heart, they will hear the sounds made by the blood rushing through it from the opening and closing of the valves. When you are told that your dog has a heart murmur, that is because the vet can hear extra or unusual sounds caused by a disturbance in the blood flow.

Symptoms of a Heart Murmur

Not all heart murmurs come with additional symptoms. The main symptoms usually consist of panting and coughing. However, when the murmur is caused by heart disease, you may also see:

Causes of a Heart Murmur in Dogs

There are many different causes of heart murmurs, including:

The valves in the heart act as non-return valves, so that means that blood can only flow in one direction. But if a valve becomes faulty, there can be a squirt of blood through the gaps in the valve with each heartbeat, causing the sound of the heart murmur. The most common cause of this in older dogs is a condition called myxomatous mitral valve disease.

Holes in the Heart

There are several different conditions that can cause a heart murmur in dogs: 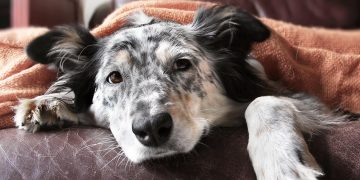 Ivana Crnec
/
You want what's best for your dog, which is why it's so important to know what to look for when your dog isn't acting quite right. These are some common dog d...
Continue Reading

Diagnosis of a Heart Murmur

Once you vet suspects that your dog may have a heart murmur, they will then listen more closely to establish which one of the following three categories it fits into:

Then, they may also grade it on a scale of loudness. This is because some murmurs can be very quiet, while others can be loud enough to hear without even needing a stethoscope. Grades 1, 2 and 3 are the quietest ones. Now, these often occur in puppies and are known as an “innocent murmur”. These usually cause no problems for puppies and have disappeared before they are 4 months old.

The louder heart murmurs (grades 4, 5 and 6) will need evaluation by a cardiologist who will carry out an echocardiogram, which allows them to see the structure and function of the heart in real time. Your dog will not usually need to be sedated for this procedure as they just need to lay quietly for around 20 minutes while the veterinary technicians gently hold them in place.

Treatment Plans for a Heart Murmur

While the heart murmur itself cannot be treated, the symptoms and problems of the condition causing the murmur usually can. With so many different causes of the problem, the treatment can vary hugely. Heartworm, for example, is generally treated with medication, but extreme cases may require surgery.

In some cases, especially with the mild murmurs often seen in young dogs, it may disappear all on its own with the need for any treatment.

Can Heart Murmurs Be Prevented?

Just as with treatment, the heart murmur itself cannot be prevented, but the condition which caused it might be preventable. So, you should ensure that your dog receives their heartworm preventatives and brush your dog’s teeth regularly to prevent bacteria from traveling to the heart.

Breeders can also play their part in ensuring that they only breed from dogs who are free from the genetic conditions that cause heart murmurs. These include: 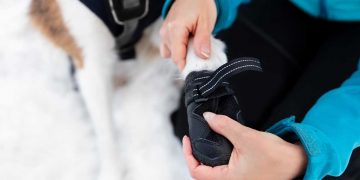 Lynda Taylor
/
Dog boots for winter are essential in making sure your dog's paws don't get damaged by salt, snow, or ice. Here are the top three brands to try.
Continue Reading

5 Things To Know Before Using CBD Oil for Dogs

Grace Hawkins
/
CBD oil for dogs can be used to treat aggression and arthritis, among other health issues. Before considering using it for your dog, here's what to know.
Continue Reading
Follow Us On:Facebook