The Infamous Blowfish: A Guide to Owning Puffer Fish

Puffer fish, also known as blowfish, are famously able to inflate their bodies to several times the normal size using the elasticity of their stomachs and their ability to take in huge volumes of water. In the wild, this discourages predators by making the puffer fish all but inedible; in captivity, it makes for a fascinating show of one of nature's most interesting creatures.

Size: The size of saltwater and freshwater puffer fish ranges considerably, as there are more than 120 different known variants. Dwarf puffer fish register at the small end of the scale and are approximately 1 inch long. At the opposite end of the spectrum is the giant fresh water puffer fish, which can reach a size of about 25 inches. Most pet puffer fish are between 3 and 6 inches long.

Variants: As with clown fish, many different scale and color variations are seen across the blowfish family. For example, the white spotted puffer fish has an almost entirely black body with light specks scattered across its surface. By contrast, the green spotted puffer fish features a bright-green body marked with large black splotches and a silver, scaly underside. Porcupine puffer fish have cream-colored bodies with black spots, from which long pointed quills protrude when the fish puffs up in response to a threat.

Many pet owners swear that these fish have some of the liveliest personalities in the piscine kingdom. They've been known to beg for food and are said to be able to recognize their owners by sight. While it's interesting to see them puff up, they only do this when they're frightened, and it puts a great deal of strain on their bodies. Avoid scaring or stimulating them just to see them inflate. 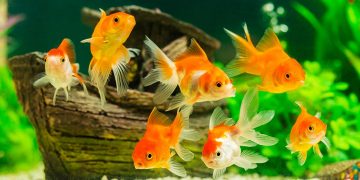 Feeding: In the wild, puffer fish tend to eat mostly invertebrates and algae. Fish raised in captivity will do fine on a diet of worms, krill and prawns, with some live algae or algae wafers mixed in.

Tank Care: Maximum tank size depends on the size of the fish living in it, and a good rule of thumb is to give the fish 5 to 6 gallons of water for every inch of body size. Puffer fish prefer saltwater aquariums with slightly alkaline (i.e., basic) water; a pH level of about 8.0 to 8.5 is best. Aim for a temperature of approximately 80 degrees Fahrenheit.

Health Concerns: Many saltwater and freshwater puffer fish suffer from parasite-based fish diseases commonly referred to as "ich." These parasites make the scales or skin of your fish itchy, and they may try to scratch themselves by rubbing up against the walls of the tank or the items inside it. Other signs of ich include skin or scale discolorations and lesions.

It's also worth mentioning that puffer fish naturally produce extremely poisonous tetrodotoxins, for which there are no known antidotes. While most pet owners don't usually make meals of their fish, it's worth keeping in mind that the puffer fish is not meant for human consumption.

Life Expectancy: Life spans vary according to variant, but you should expect a well-cared-for pet puffer fish to live for about 10 years.

Whenever possible, shop for your pet fish in a store, where you can observe the fish before you buy them. Some online vendors may sell unhealthy, genetically inferior or undesirable fish and leave you with little or no recourse if you're not satisfied with your purchase.

You may have to travel to a specialty fish store to find certain variants such as the freshwater spotted puffer fish for sale.