Predatory but Shy: A Guide to Owning Lionfish

The lionfish is a venomous, predatory fish species native to warm, tropical waters of the Indo-Pacific region. Today, the Atlantic lionfish populates the Atlantic Ocean and Caribbean Sea and seems to be spreading, with wild populations now catalogued as far north as the Florida Keys. Some hobbyists have also taken freshwater lionfish as pets, but many of them don’t take well to captivity and tend not to survive in aquaria for very long.

Size: The head-to-fin size of this fish differs considerably across the many variants of the species. The common lionfish normally grows to a length of 12 to 14 inches. Dwarf and blackfoot types are considerably smaller, reaching an average length of about 3 to 4 inches. All variants have long, separated spines and a fan-like arrangement of jutting, narrow fins.

Color: Almost all variants, from Atlantic lionfish to blackfoot lionfish, are striped. Just about any combination of white, maroon, black, yellow, orange, brown and red can be seen in the striping patterns, though a mixture of both light and dark colors is most common.

Variants: Blackfoot lionfish tend to have more red, blue and black in their scales than other species. Many dwarf lionfish also remain in the red-to-brown color spectrum.

Lionfish are actually quite shy and reserved, despite their impressive appearances and predatory nature. It’s a good idea to keep them in small groups consisting of one male and several females, as males will show aggression towards one another, much like male betta fish do. 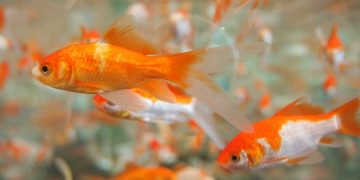 The World’s First Domesticated Fish: A Guide to the Goldfish

PlusPets Staff
/
Goldfish were one of the world's first domesticated fish. They get along with other fish and will even come to associate their owners with food. Read on to le...
Continue Reading

Since lionfish are predators, it’s not a good idea to keep them in the same tank with other fish, particularly smaller fish with few defenses. Lionfish are particularly known for attacking and eating pet shrimp. Also, you should avoid directly handling your lionfish at all costs – while their venom is not fatal to humans, you’ll be in for a prolonged and very painful experience if you come in contact with it.

Feeding: Until you get your fish used to eating dead fish food, which will take some time, you should feed them live food. Small crabs, shrimp and fish are preferred. Over time, slowly introduce some dead substitutes, unless your budget allows you to continue feeding your fish with more expensive live food.

Tank Care: Make sure your saltwater aquarium has a volume of at least 75 gallons. Your salinity reading should be at least 1.027, and the ideal water temperature is between 75 and 79 degrees Fahrenheit. Providing these fish with plenty of crevices to swim through and hide in is also a good idea and will help keep your pets happy.

Health Concerns: One of the most interesting lionfish facts is the breed’s hardiness and resistance to disease. Scientists have marveled at the species’ ability to fight off the parasitic, fungal and bacterial illnesses that kill many other domesticated fish species. However, it’s essential that you take proper care of your tank, ensuring that salinity and temperature levels are optimal at all times and that the water is filtered and clean.

Life Expectancy: Captive lionfish generally have a lifespan of 10 to 15 years.