Aggressive & Curious: A Guide to Owning a Betta Fish

Betta fish, also known as Siamese fighting fish, are among the world's most popular domesticated aquarium pets. Native to Thailand, where their name translates as "biting fish," betta are uniquely equipped with a so-called "labyrinth organ," which allows them to draw oxygen from the air in addition to using their gills to get it from water.

Size: Siamese fighting fish grow to an average length of 2½ to 3 inches.

Color: Thanks to creative and selective betta breeding, buyers have an impressive range of colors to choose from. These fish have an iridescent appearance and seem to change color when viewed under different lighting conditions or from different angles. Turquoise, yellow, green, white, orange, red and blue are the most common colors. Interestingly, these fish display stronger colors when they're agitated or distressed.

Bettas are sometimes called Siamese fighting fish for a reason – they're very aggressive, like piranhas. Males tend to be more rambunctious than females, and researchers have documented instances of betta fish attacking their own reflections in a mirror.

Curious and relatively intelligent, a betta will interact with humans to a significant degree, intently observing the goings-on taking place outside its tank and playing games like peek-a-boo. For this reason, many owners like to include recesses and hiding places in their betta fish tanks. 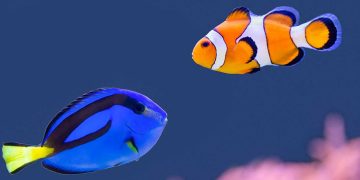 With the Right Accessories and Resources, You Can Start a Saltwater Aquarium

PlusPets Staff
/
Maintaining a saltwater aquarium can be tricky, but with the right accessories and proper amount of care, your fish will be able to thrive.
Continue Reading

Tank Care: A proper betta fish aquarium should have warm water that's been treated with a water softener. While these fish can survive in a relatively limited living space, without the elaborate aquarium filters and aquarium pumps that most other species need, it's still better to give them ample room and purchase pumping and filtration systems to keep the water clean.

Males should not share living space; if more than one male is kept in a single betta fish aquarium, separate them using dividers. Generally, females should not be kept together without dividers either, except in groups of four or more – the females will establish a social hierarchy in larger groups that will facilitate a peaceful living environment for all.

Health Concerns: Betta fish diseases can be divided into three general categories: environmental, parasitic and bacterial. Environmental diseases result from polluted tanks, inadequate betta care and contaminated living environments, and can be treated or avoided by keeping the water in the tank or aquarium clean. Symptoms of parasitic and bacterial conditions include listlessness, low energy levels and abnormal swimming. When caught early, most can be treated.

Life Expectancy: On average, these fish live two to three years; owners who practice careful betta fish care can extend the lives of their pets to as long as five years.