Owning Nemo: A Guide to Taking Care of Clown Fish

Finding fame thanks to the motion picture Finding Nemo, clownnfish are favorites of aquarium hobbyists around the world. Native to warm saltwater seas and oceans in the Far East and South Pacific, clown fish are brightly colored with distinctive striping and are sometimes called "anemonefish" because of the symbiotic relationships some clown fish species have with sea anemones.

Size: As with many fish, males tend to be smaller than females. The average size of an adult clown fish is 2 to 5 inches in length.

Variants: Maroon clown fish are the most unique species variant, displaying gold or yellow stripes with white borders (rather than white stripes with black borders) and dark red scales not seen in any other clownfish species. Some maroon clownfish have bright red scales rather than dull, dark, matte burgundy ones.

Clown fish have a fascinating social hierarchy. They are group-oriented and are led by the most dominant female. Only one male and one female in any given group – the dominant pair – will mate. One of the most interesting clown fish facts is that this species is hermaphroditic; fish that begin life as males actually go on to transform into females upon reaching maturity. If the dominant female dies, her dominant male partner (or one of the other high-ranking males) will actually become a female, and the remaining males will move up one step in the hierarchical social structure. 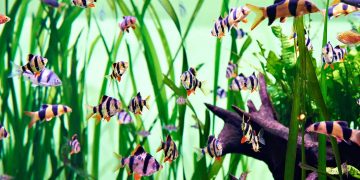 You Can Build or Buy the Perfect Aquarium Stand

PlusPets Staff
/
An aquarium stand is often an afterthought when putting together a home aquarium system, but there are advantages to selecting a stand early in the planning p...
Continue Reading

Feeding: Clown fish are omnivores. They feed on algae, anemones and mollusks in the wild, and need a flaked fish food that delivers the same nutrients found in those sources.

Tank Care: Include rocks with live algae growth in a clown fish saltwater aquarium, as well as plenty of nooks where the fish can address their natural need to hide. They are placid and tend to get along well with other small fish species like the butterfly fish. Marine aquariums require care to set up properly, and mistakes can adversely affect the health of the pets that live in them. Make sure to include:

You'll also need to monitor the salinity of the water, as well as its pH level, nitrite levels and temperature. Clown fish prefer water that's 78 to 80 degrees Fahrenheit and slightly alkaline, with a pH level in the 8.0 to 8.5 range.

Health Concerns: As for all fish, bacteria, fungi and parasites are the most common causes of illness. If you notice any fish with deteriorating energy levels, swimming difficulties, bleeding, discoloration or scale lesions, isolate it from the others and talk to a fish care professional. Treatment compounds can be added to the water to help the fish cleanse their bodies of the intruders.

Life Expectancy: Clown fish live for about three to five years in captivity.