A Guide to Owning a Painted Turtle

Painted turtles are an aquatic breed that loves to swim and bask on dry land interchangeably. Their swimming makes them an interesting focal point in your home, and the ease of painted turtle care makes them a great pet.

Painted turtles are found in Canada and the United States, as well as northern Mexico. They typically live in marshes, lakes, ponds and slow rivers.

Size: The maximum size of a painted turtle is about 10 inches, which is larger than other breeds, such as the box turtle, but still fairly manageable. 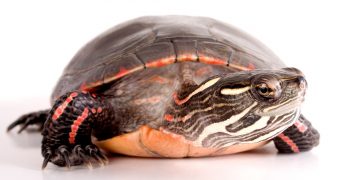 Painted turtles are one of the more social breeds of turtle and are quite playful in the wild. In captivity, they are a little more shy, but when left to their own devices in their natural environment, they are quite active.

Feeding: Painted turtles eat a variety of foods, including meats such as crickets, worms or fish, and vegetables like mustard greens, spinach and carrots. They don’t generally know when to stop eating, so be sure to remove excess food after 30 to 45 minutes.

Housing: A full-grown painted turtle should be kept in an 80-gallon tank with either rocks or a turtle ramp to serve as a dry area. The water should typically be as high as the turtle is wide. A UVA/UVB light is required.

Health Concerns: Common health issues for painted turtles include fungus, swollen eyes, shell rot and respiratory disease. These issues can be caused by dietary deficiencies or by contaminated living conditions.

Life Expectancy: Painted turtles have an average life expectancy of 20 to 25 years.

Like many breeds of pet turtles, pet painted turtles are often captured in the wild. This is dangerous to the longevity of the species, so always check that the turtle you’re buying has been bred in captivity.