It Takes Patience: A Guide to Owning a Chameleon

A Guide to Owning a Chameleon

Chameleons are a great choice of exotic pet — their ability to change color and shade is remarkable, and they're sure to draw attention in your home.

It should be noted, however, that chameleons aren't always the best choice for those who are new to having reptile pets. Chameleon care and maintenance is challenging, and the lizards themselves are easily stressed. It takes patience and expertise to keep a chameleon as a pet.

Chameleons are found in Africa, Madagascar, Asia, Southern Europe and even India. They have also been found in Hawaii and California. In terms of habitat, chameleons often live in trees and prefer warm climates, varying from rain forests to deserts.

Size: Chameleon size varies among breeds. The smallest chameleons may be only an inch long, while the largest could be up to 3 feet in length.

Markings: Markings, too, will vary by breed. Three chameleon breeds commonly chosen as pets have markings as follows:

Note that the colors above are for male chameleons. Females of the species tend to be less vibrant and colorful than males. 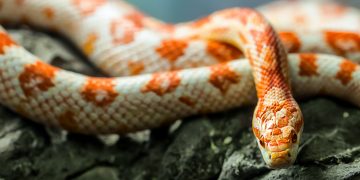 PlusPets Staff
/
Corn snakes are very easygoing and are non-venomous. They are considered to be one of the easiest snakes to keep as pets. Read on to learn more!
Continue Reading

As mentioned earlier, chameleons are skittish; in fact, their unique ability to change colors generally presents when they are nervous or frightened. They are solitary and shy, even among their own species. Because of this, it's best to keep your chameleon in an out-of-the-way place where it won't be frequently disturbed and to handle it as little as possible.

Feeding: Chameleons primarily eat insects, including flies, crickets and roaches. They will also eat worms, in particular silkworms. Multiple feeders should be kept in the reptile cage and frequently filled to ensure the chameleon has food on hand when it is ready to eat. A chameleon's nutritional needs are complex, so it's best to speak with the breeder or conduct research online to establish a correct diet for your pet.

Housing: Unlike other reptiles, chameleons should only be kept in mesh cages to ensure proper ventilation. Chameleon cages that are 2 feet wide, 2 feet deep and 3 feet tall are recommended, as chameleons like to climb. Substrate such as newspaper or paper towels is necessary, and the cage should be furnished with plants and branches, as well. Keep the cage temperature between 70 and 80 degrees Fahrenheit during the day and roughly 10 to 15 degrees lower at night.

Health Concerns: Chameleons are very sensitive to vitamin deficiencies and are also susceptible to illness when their environment is not properly maintained. Make sure you know the dietary and habitat requirements of your particular chameleon, and monitor its general appearance for signs of ill health. These include swollen joints, sores and sunken eyes.

Life Expectancy: On average, chameleons live between 5 and 10 years.

Breeders and pet stores offering chameleons for sale can generally be counted on to offer healthy pets, but make sure you ask for a health guarantee of at least two weeks. On top of that, look for signs of illness on the chameleon itself before you buy.

Prices for chameleons vary by breed and also by gender. Baby chameleons can start as low as $25 or $30, while the most exotic, full-grown male chameleons can cost as much as $300 or more.