The Challenges of Owning a Box Turtle

A Guide to Owning a Box Turtle

A box turtle is a challenging turtle to keep as a pet. Many elements of box turtle care, such as feeding and housing, are complex. Mismanagement can result in death in a very short period of time. Box turtles are easily damaged and become stressed and nervous when held, which makes them less suitable pets for families with children or other pets.

Box turtles are only found in North America and are spread across the eastern and southern United States. Their habitat generally includes marsh and woodlands, pastures and areas near ponds and streams.

Size: Full-grown box turtles are typically 4 to 8 inches in length.

Markings: Box turtle markings are dependent on the type of box turtle. There are eight in all, three of which are commonly housed as pets:

Other box turtle breeds, such as Florida box turtles, are more difficult to find and are not often chosen as pets. 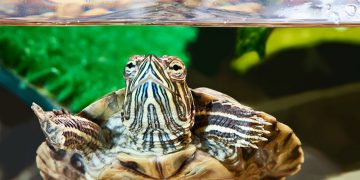 Challenging but Rewarding: A Guide to Owning a Pet Turtle

PlusPets Staff
/
Turtles are a unique pet option that isn't suited for everyone, especially if you want to cuddle and play with your pet. Here's what you need to know before b...
Continue Reading

Box turtles become easily stressed when handled, which makes them difficult pets to own. If they sense danger, they will pull in their head, limbs and tail and close their shell so that no flesh is exposed; then, they simply wait until they perceive the threat to be over.

Feeding: Box turtles are omnivorous and enjoy most fruits and veggies, as well as worms and insects. It's best to feed your turtle on a flat rock rather than in a bowl to encourage the turtle to climb. A calcium source such as boiled egg shells is also an important part of the box turtle diet.

Housing: Box turtles can be housed indoors or out, depending on the weather where you live. A reptile tank or even a plastic tub will do for housing these turtles. Line the tank with a combination of potting soil, sand moss and leaf mulch, and be sure to mist it every day to provide proper humidity. Also include rocks for the turtle to climb on, a pool for bathing and potted plants to recreate a natural environment. A UVB light and warming light bulb are also recommended.

Health Concerns: Box turtle pets are highly subject to illness if their living conditions and diet are not maintained, or if they do not get enough exercise. Symptoms of illness include lethargy, paralyzed legs, swollen eyes and mouth rot.

Life Expectancy: The average life expectancy of a box turtle is 40 years, though some have been known to live up to 100 years!

The box turtle population is dwindling because pet stores often rely on capturing wild turtles for their inventory. Before you buy from a pet store, make sure it sells only box turtles that have been bred in captivity, or better yet, look specifically for a box turtle breeder.

Box turtles can cost hundreds of dollars; prices range from $200 to $400 for adults and babies alike.