Iguanas are a great choice of lizard pet if you're willing to put in the time to tame them. They require plenty of handling when they're babies— two or three times a day for roughly 15 minutes —in order to adjust to domestication. 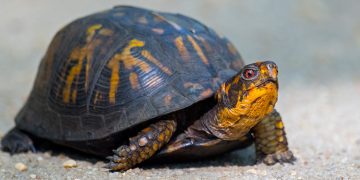 The Challenges of Owning a Box Turtle

PlusPets Staff
/
Box turtles are difficult pets to own because they become easily stressed and irritated when handled. Here is a guide to deciding whether this pet is for you.
Continue Reading

Feeding: There is debate as to whether iguanas are herbivores or omnivores. Many experts recommend that iguanas only be fed plants, with emphasis on fruits and vegetables such as collard greens, carrots, green beans, figs and apples (avoid iceberg lettuce, as iguanas will get hooked on it and snub other foods). They eat daily, typically in the morning after they've warmed up, and should essentially be fed until they can't eat any more.

Housing: Iguanas require at minimum a 30- to 50-gallon aquarium when young and much bigger enclosures as they grow. Their homes require a substrate such as newspaper or artificial grass, shallow food and water dishes and climbing structures such as rocks, branches or driftwood. The tank should be heated between 85 and 95 degrees Fahrenheit during the day, between 70 and 75 F at night and between 110 and 115 F for basking time. Iguanas need 14 hours of daylight every day, and at least 5 hours of natural sunlight a week. Because of this, it's best to have indoor and outdoor iguana cages. (Note: Avoid glass for outdoor cages, as it will heat up even on cool days.)

Health Concerns: Aside from the usual reptile health concern of parasites, iguanas are susceptible to metabolic bone disease and kidney failure. Both of these conditions can be avoided by regulating your iguana's diet.