A Guide to Milk Snakes: The Perfect Breed for First-Time Snake Owners

A Guide to Owning a Milk Snake

Milk snakes are well-known for their distinctive patterns and colors, and are therefore a common choice as a pet. They require very little upkeep, which makes them great for those who are new to the domestic snake world.

Milk snakes can be found in North and South America, and are common in the northeastern United States, from Maine to Minnesota and Iowa. Their natural habitat is in woods, meadows and farms, but they will also move into cities.

Size: The average length of an adult milk snake is between 25 and 30 inches.

Markings: Milk snake markings include a "saddle" pattern, named because it looks like the snake has saddles all down its back. The saddle is typically reddish-brown with black borders. Different types of milk snakes — for example the Pueblan milk snake, Sinaloan milk snake or Honduran milk snake — have rings instead of saddles and are generally red or tangerine in color. The Eastern milk snake, another common type, is grayish in color and generally has a tan spot-and-stripe pattern. 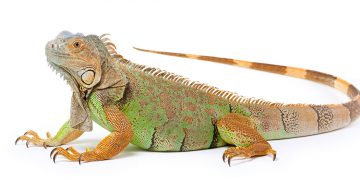 PlusPets Staff
/
Iguanas love spending time basking in the sun. They require lots of handling from a young age in order to grow accustomed to captivity, but make for great pets.
Continue Reading

Milk snakes are typically nocturnal and are more active in cooler temperatures. Though shy, they are generally a laid-back breed and are unlikely to bite.

Feeding: Milk snakes in captivity typically eat pre-killed mice and only need to be fed every 4 to 5 days for young snakes and 7 to 10 days for adults. Baby milk snakes will typically eat baby mice and work up to adult mice as they grow. Typically, the rule in feeding any snake is to make sure the food is not more than one-and-a-half times the girth of the widest point on your snake.

Housing: Milk snakes like to hide, so their tanks should include substrates such as aspen shavings or cypress mulch for burrowing and enclosures such as a shoebox or plastic tubs for hiding. The tank should be kept clean and dry, at a temperature between 78 and 82 degrees Fahrenheit. No external light is necessary, as milk snakes do not like bright light.

Life Expectancy: The average life expectancy of a milk snake is between 15 and 20 years.

Milk snakes are easily found through breeders or in pet stores. As with any snake, you'll want to ensure the milk snake you choose is healthy. Be sure to inspect the skin for any bumps, wounds or signs of scale issues, and also look at the snake's eyes to make sure they're clear and free of infection. A reputable breeder or store should be able to guarantee that the snake is free of mites and ticks, as well.