A Guide to Owning a Corn Snake

Corn snakes get their name from the corn-like pattern on their bellies and the fact that they were often spotted in corn fields. They're an easygoing species, non-venomous and not quick to bite, which not only makes corn snake care very easy but also makes them ideal pets. In fact, they were one of the first species of snake to be kept as pets and are still one of the most popular choices.

Corn snakes are a North American breed, found primarily in the southeastern United States. Aside from corn fields, they like overgrown fields and abandoned buildings.

Size: The average length of an adult corn snake is between 4 and 6 feet.

Markings: Aside from the corn-like pattern on the underbelly, there are so many different variations in corn snakes that a distinctive color and markings are difficult to pinpoint. Snow corn snakes, for example, are very pale and white, to the point where you can barely see their markings, while albino corn snakes have white under-coloring and very vivid markings. 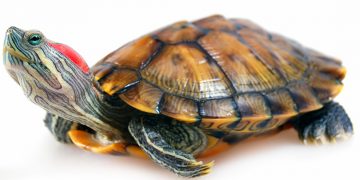 PlusPets Staff
/
Red eared sliders, while colorful and extremely active in the water, can be quite shy and skittish. Don't buy this breed if you want to spend lots of time hol...
Continue Reading

Corn snakes in the wild hunt using constriction. They don't like the cold, and though they hibernate in the winter, they prefer dark hiding places when the weather is even moderately cold. When they are hungry or the weather is warm, they will come out and are very active and interested in their surroundings.

When under stress or when threatened, corn snakes will rattle their tails or coil themselves.

Feeding: Corn snakes typically eat pre-killed fresh or frozen mice, as live mice could end up causing injury to the snake. Baby corn snakes need to be fed every 5 to 7 days and should only eat newborn mice. Adults can consume large mice but may only need to be fed weekly or even every two weeks.

Housing: Adult corn snakes should be housed in a tank between 20 and 40 gallons in capacity. Though they like to have space, they also need places to hide, so include plants in the tank. A water bowl is also necessary to provide drinking water, and you'll need pine chips or another form of tank lining. Since snakes cannot regulate their own body heat, the tank should be heated to between 70 and 75 degrees Fahrenheit on one end and between 80 and 85 F on the other. It should also be misted frequently with distilled water to keep the tank air moist.

Health Concerns: Corn snakes are generally a healthy breed, but may be susceptible to regurgitation and shedding problems. If you notice your snake is not shedding properly, ensure it has a damp hiding place to help moisten its skin. In the case of regurgitation issues, a grapefruit seed extract can be given in the drinking water as a one-time treatment, but it's best to find out what is causing the regurgitation. Possible causes include low tank temperature, feeding during shedding or an infection.

Life Expectancy: With proper care, the average lifespan of a corn snake is 15 to 20 years.

Corn snakes cost anywhere between $60 and $200 for hatchlings and slightly higher for adults. Corn snake breeders are a smart choice for buying, but the main thing is to ensure your corn snake was bred in captivity to avoid the chance of mites or ticks. Also, check it over for abrasions or loose scales, which are signs of an unhealthy snake.