Why Do Cats Chirp? The Reason Why Your Cat Sometimes Sounds Like a Bird

How to Translate Cat Chirping

One of the reasons why cats and people get along is that we can communicate with each other through sounds and body language. It’s thought that cats have up to 16 different sounds at their disposal and that when they make a noise, they are trying to either tell you how they are feeling or what they need. So, when they contentedly purr as you stroke them or when they hiss at another cat, we can translate those sounds into our human language to understand what is going on. But how do we translate cat chirping?

Some cats are definitely noisier than others and some may even have developed their own unique ways of letting you know what they need. You’ll also find that kittens tend to be more vocal then adult cats, perhaps because they need more food, water and warmth.

There are also some notoriously vocal breeds of cat. Siamese, Bengal and Burmese are all well known for their talkative natures. So, if you are looking for a conversational pet, they might be a great choice!

When we listen to what our cats are trying to tell us, it really helps to understand how they are feeling while also making sure that we meet all of their needs.

What Is Cat Chirping?

When asked what sound a cat makes, you probably think of a meow or a purr. But if you have lived with a cat, then you know that they have a whole repertoire of sounds. The chirp is a short, peep-like sound that can sound very similar to a songbird’s warble. You’ll sometimes see the sound described as “chattering”.

Why Do Cats Chirp?

Chirping is one of the first sounds that a kitten will make, and it is used to get the attention of the mother, usually when they are hungry. The mom cat also chirps to tell her kittens to stay close or to follow her.

Researchers have found that kittens react more to their own mom’s chirps than to those made by other cats with youngsters. The unique sound makes it easy for the kittens to find their mom when living within a large group of cats.

Your cat may even chirp at you as their replacement mom and supplier of the things they need to survive. So that is likely to mean that their food bowl is empty and needs refilling or that they need some attention from you. A prime time to hear chirping is when you return home after being out. The excitement of being reunited, combined with the potential for food, will have them chirping with delight.

It’s also thought that chirping is connected to a cat’s hunting instinct. Another key time to hear an adult cat chirp is when they are watching or stalking their prey. In this situation, they vocalize because they are frustrated that the birds are on the other side of the window, or because they are excited from being on the hunt. 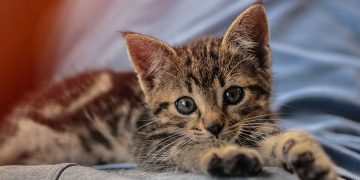 They’re All Going to Be Cute: What to Know When Picking out a Kitten

PlusPets Staff
/
If you're wondering how to pick the right kitten you've come to the right place. We'll give you some tips on what to look for when choosing a kitten and what ...
Continue Reading

Moreover, scientists have even suggested that the chirping might be a hunting strategy. While carrying out research they concluded that cats may be mimicking the noise that their prey makes, all in an attempt to lure them closer.

Also, you may hear your cat chirping when they are playing with their toys. Without access to hunt the local wildlife, they may instead turn their attentions to stalking and pouncing on their fluffy toy mouse, all accompanied by some excited chirping.

Understanding What Your Cat Is Telling You

So, how do you know what it is that your cat is trying to tell you? Well, the best way is to consider both your cat’s body language and the noises that they are making. When they are chirping, notice if their tail is swishing, if their ears are up and if they are gently head butting. Then, they are feeling content and enjoying your company. But, keep an eye on that communication; if it suddenly changes, then that might be your cat telling you that they have had enough interaction for now. Continue at your peril.

If the chirping is combined with a crouched pose along with sideways pointed ears and an arched back, then they may instead be ready to pounce on their prey. If your cat lives inside, then this behavior may also be telling you that your feline needs more opportunities to express their hunting instincts. Chasing feathers tied to a stick or one of the electronic cat games may be great options, they will also save you from being pounced on as you walk past.

Living in harmony with our cats is all about understanding each other. A little knowledge of how your feline pal is trying to communicate their needs will make a huge difference to the quality of your relationship.

Our Feline Friends Get Acne, Too

Lynda Taylor
/
Did you know cats can get breakouts? Cat chin acne is common and easy to treat if caught. In this article we look at nine treatment options.
Continue Reading 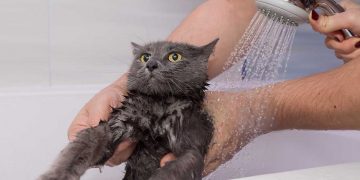 Do Cats Actually Need Baths? The Answer May Surprise You

Lynda Taylor
/
Do cats need baths? Cats are naturally clean creatures, but there are some cases where it takes more than a pink tongue to clean. Learn more here.
Continue Reading
Follow Us On:Facebook