A Guide to Owning a Bearded Dragon

Bearded dragon lizards, also called "beardies," were once an unusual choice of reptile pets, but they are increasing in popularity. Now second only to iguanas, they're a popular choice of lizard for their size and their temperament, as well as their ease of care.

Bearded dragons originated in Australia. Depending on the breed, their habitats include rocky areas, deserts, and open woodlands. They are also partially arboreal, which means they enjoy climbing and basking in trees, particularly when they are young.

Size: Bearded dragons are typically between 16 and 22 inches in length.

Markings: Bearded dragons are known for their triangular heads, large in proportion to their short, flat bodies. The "beard" in bearded dragon refers to the prickly pouch under their jaw, which they can expand to make themselves appear larger when threatened. Males turn their pouch black when they are courting females. 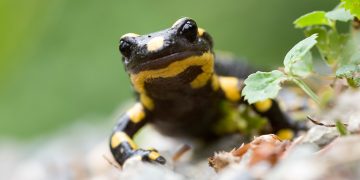 Distinctive & Interesting: A Guide to Owning a Pet Salamander

PlusPets Staff
/
Salamanders are very distinctive in their coloring and markings. They do take quite a bit of work to take care of, however, so you should be prepared before y...
Continue Reading

Bearded dragons are typically gentle, friendly and calm lizards, which makes them a great choice for kids. They are unlikely to strike or become irritable and can often be sociable.

Feeding: Like iguanas, bearded dragons are omnivores. They eat a variety of vegetables, including carrots, collard greens, peas and kale, all of which should be finely chopped when your pet is young. Bearded dragons also eat insects, such as crickets and superworms, and should be given a vitamin D3 and calcium supplement. Adult bearded dragons may be given baby mice, but only sparingly.

Housing: Bearded dragons need an aquarium or terrarium that is at minimum 36 inches by 12 inches by 18 inches. The tank should be lit using a combination fluorescent and incandescent light fixture. Inside the tank, place substrate such as paper towels or aquarium gravel, a hiding area such as a box or rock cave, artificial plants, a water bowl and a secure climbing area. Good bearded dragon care also involves cleaning the tank daily to remove waste.

Health Concerns: Bearded dragon diseases include metabolic bone disease, which is caused from a lack of UVB rays. Bearded dragons typically need between 12 and 14 hours of daylight; a lack of daylight can cause circadian rhythm issues, resulting in lethargy and sickness.

Life Expectancy: On average, the life expectancy of a bearded dragon is between 5 and 8 years, though with proper care many can live to 10 or 12 years old.

Due to the high demand caused by their growing popularity, you can easily find bearded dragons for sale from pet stores or bearded dragon breeders. As with any reptile, you'll want to secure a guarantee of health that lasts at least two weeks and also check for signs of illness or disease before you purchase a specific bearded dragon. Check to see if the lizard is alert and is free of scars or wounds on its skin. Make sure its eyes are clear as well.