Stars of the Sea: A Guide to Owning Starfish

Starfish are marine invertebrates with unique radial symmetry built on a vascular system rather than a skeleton, featuring five or more “arms” that, together, form the creature’s unique star shape. Since these creatures are technically echinoderms and not fish, the synonymous term “sea star” is preferred by many scientists.

Size: Most starfish average 5 to 8 inches in length from head to tip, though some variants grow as long as 14 inches.

Color: Varying shades of pink, gray, brown, blue and red are most common, and most sea stars have orange undersides. Like eels, the majority of starfish show little in the way of external patterning, though some individuals may have a silvery glitter to the scales that top the centers of their bodies.

Variants: While scientists have catalogued more than 1,800 unique subspecies of sea star, the best-known variants include the eleven-armed starfish and the quill-covered, many-armed “crown of thorns” starfish. Most aquarium enthusiasts who keep sea stars as pets have common starfish.

Starfish tend to be slow-moving and rather sluggish, with low activity levels. One of the most useful facts about starfish for pet owners is that they move primarily in search of food and will keep to the bottom of your fish tank. They can be kept in the same saltwater aquarium as other fish, so long as you’re careful to maintain the proper tank conditions at all times. For more starfish facts and starfish information on the different sea star species kept as pets, visit your local aquarium store and talk to a professional. 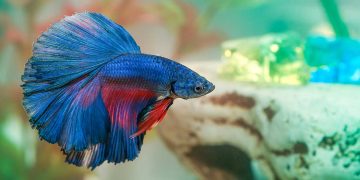 PlusPets Staff
/
An aquarium pump is an integral and necessary part of a properly functioning aquarium. They help filter water, and move oxygen around to help keep your fish h...
Continue Reading

Feeding: In their natural environment, these creatures are carnivorous predators, preferring to feed on snails and small bivalve sea dwellers. In captivity, they’ll be happiest if you feed them food akin to what they’d eat in the wild; visit your local aquarium store for a selection of live fish food.

Tank Care: You’ll need to invest in a hydrometer so you can accurately measure the salinity levels in your tank. To replicate the natural starfish habitat, you’ll need to maintain salinity between 1.022 and 1.025; aim for the higher end of this range, since even slight changes that lower the water’s salinity below acceptable levels can mean death for your starfish. The temperature should fall between 72 and 76 degrees Fahrenheit.

Health concerns: Most starfish health woes are directly caused by less-than-optimal environmental factors, primarily tank salinity and temperature. Sea stars that are too cold will visibly waste away, and low salinity can cause similar symptoms. As with all fish, bacterial, fungal and parasitic infections pose serious health hazards; you can decrease the chances of these occurring by keeping your tank water clean. Use a quality pumping and filtration system, and change 10 to 15 percent of the water volume every week.

Life expectancy: The common starfish has an average lifespan of 5 to 10 years.