A Guide to Owning a Garter Snake

Garter snakes are often chosen as pets because they're smaller in size than many other popular types of domesticated snakes. They are a little tricky to handle, however, and require a lot of attention. They also have personality quirks, including the tendency to stretch out when held, rather than coiling around an arm or between fingers.

Garter snakes are common across North America, from Florida to James Bay in Canada. Their natural habitat is very diverse, including wetlands, marshes, ponds, fields and prairies. Garter snakes are semi-aquatic, so wherever they're living, they will generally stay close to water.

Size: The average size of an adult garter snake is between 20 and 30 inches long.

Markings: Garter snake markings vary based on the breed and on the individual snake itself. Common garter snakes and Eastern garter snakes often have long stripes running from head to tail, while checkered garter snakes (no surprise) have a checked pattern rather than stripes. The colors of stripes or checks include yellow and red, while the snake's background colors are usually darker. 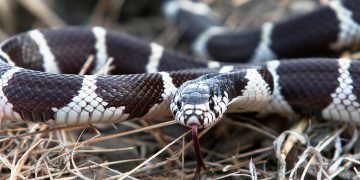 Easy to Care For: A Guide to the King Snake

PlusPets Staff
/
King Snakes are a popular breed due to their docility and ease of care. They are adaptable to many living situations and are mostly active at night.
Continue Reading

Garter snakes are sometimes believed to be high-strung and have been known to bite, but with gentle handling and proper garter snake care, they will become accustomed to being held and approached. It's a good practice not to handle the snake right after it eats, as they are particularly nervous at this time and may regurgitate their meal.

Feeding: Garter snake diet varies based on the breed — some eat mice, but others require a more complex diet. Earthworms, feeder guppies and other types of fish are acceptable foods, but you'll need to ensure that no parasites will be passed to your snake from its food. Be sure to consult a garter snake breeder, pet store or comprehensive care guide for accurate feeding tips for your snake.

Housing: The minimum recommended aquarium size for an adult garter snake is 20 gallons. The tank should be lined with a substrate such as newspaper or dry mulch, and plenty of hides, such as plastic tubs or shoeboxes, should be provided. Also include a dish of fresh water that is large enough for the snake to immerse itself in. The ideal temperature for the tank is between 75 and 85 degrees Fahrenheit.

Health Concerns: Because of the complex requirements of their diets, garter snakes are susceptible to issues like Vitamin B1 deficiency. Signs of this condition include convulsions and a loss of coordination, and it can be fatal if not treated. A vitamin shot from a vet will cure it, but it's best to prevent the condition altogether by paying close attention to your snake's dietary needs.

Life Expectancy: The life expectancy of a garter snake is a little shorter than other breeds, such as corn snakes or ball pythons. The average lifespan is roughly 10 years.

Garter snakes are readily available through pet stores and breeders, and are a very affordable breed. A baby garter snake will likely cost between $5 and $15, while adults are usually priced around $50 to $75. You may want to look for a snake that is already comfortable being handled, though there will still be an adjustment period as the snake gets used to you as its new owner.