Seahorses are native to shallow bodies of salt water throughout the world, both temperate and tropical. They prefer to swim near sea grass, mangroves and coral reefs, which offer camouflage and protection from predators. Deriving their name from the horse-like features they display when viewed in profile, all sea horses have coronets on their heads, which are as unique to them as fingerprints are to people.

Size: Dwarf seahorses are quite small, growing to an average length of about 1½ inches. At the other end of the spectrum is the giant seahorse, which can grow to be over 1 foot long. Most pet seahorses fall in the middle of this range, measuring between about 4 and 7 inches in length.

Color: Normally, live seahorses display uniform colors ranging from muted brown to brighter hues like orange and yellow, though some males may show a light pink hue. One fascinating piece of information about seahorses is the species' propensity for changing color. They automatically camouflage themselves so they blend in with their surroundings, and both social and courtship rituals can also cause color changes, usually from matte or drab colors to brighter, more saturated hues.

Sea horses are well-known for their elaborate courtship rituals. If a male is introduced to a tank housing a female, or vice-versa, it won't take long before a courtship dance begins. They'll start by locking tails and swimming in unison around the tank, forming a V shape. Over time, established couples display continued bonding, but if you have a single male in a tank with several females, the male will change partners frequently. Often, if one partner in a stable union dies, the other will also die within a few days. 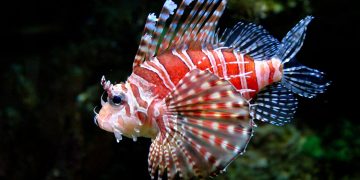 Predatory but Shy: A Guide to Owning Lionfish

PlusPets Staff
/
Lionfish are known for being predatory, however many don't take well to captivity. Read on to learn how to domesticate them properly.
Continue Reading

You should keep in mind that seahorses captured from the wild tend to have considerable difficulty adapting to captive life. It's better to choose a pet that's been bred in captivity, preferably for several generations.

Feeding: Frozen mysis shrimp, which shouldn't be hard to come by through your local aquarium store, is the preferred fish food of pet seahorses.

Tank Care: Goby fish make good tank companions for seahorses, as do shrimp and just about any placid species of bottom-swimming fish. To minimize the risk of injury or predation, you should keep your seahorses away from eels, sea anemones and triggerfish.

Health Concerns: Seahorses caught in the wild and introduced to aquariums have trouble adapting and may not feed on the food you offer them. This can, in turn, cause a whole host of health problems, primarily infectious fish diseases due to compromised immunity.

Internal and external parasites are a problem for seahorses, as they are for most captive fish. Watch for symptoms including weight loss, blisters, lesions, external ulcers, washed-out coloration, strange behavior and clouded-over eyes. If you suspect one of your seahorses is sick, isolate it from the other creatures in your tank and treat it according to your veterinarian's recommendations. Simple infectious diseases can often be treated or cured using medicines and tank additives that are readily available from your local aquarium store.

Life Expectancy: The life expectancy of live seahorses is highly variable, depending heavily on the size of the fish and its ability to adapt to captivity. Dwarf seahorses usually survive for about one year, with larger variants generally surviving at least three to four years.

Aquarium stores will generally have a good selection of captivity-bred pet seahorses for sale, including dwarf seahorses. Expect to pay anywhere from about $10 to $50 per seahorse, and be sure your budget includes enough money to purchase a quality saltwater aquarium, complete with lighting, pumps and a filtration system.