Native to the tropical waters of the Amazon, Orinoco and Essequibo River basins in South America, freshwater angelfish have unique and strange ovular but compressed bodies. They are among the most common aquatic pets in the world, yet are highly valued for their striking appearance and rich color variations.

Size: While wild freshwater angelfish have been known to grow as long as 22 inches, most captive angelfish average 7 inches from head to tip when fully grown.

Color: Freshwater angelfish come in a wide range of hues and patterns. Common base scale colors include everything from yellow-and-silver to black-and-gold. Marble and zebra patterns are also common, as are smoky and lace-like markings.

Variants: The instantly recognizable queen has a trademark blue-green hue and yellow edges on its scales. Named for the color of its head, the blue face angelfish is one of the larger domesticated variants, growing as long as 15 inches in length. Blushing angelfish earned their name from their reddish faces, which contrast beautifully with their delicate albino bodies. All in all, angelfish show incredible diversity, much like clown fish. 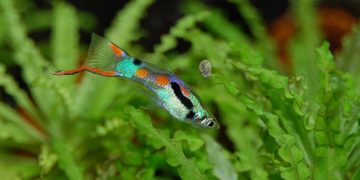 PlusPets Staff
/
Guppy fish are very social and are typically owned in schools due to their friendly nature. They are one of the most popular types of domestic freshwater fish.
Continue Reading

A high level of intelligence is part of what makes this fish so popular. These fish are able to recognize their owners and react excitedly when they see their favorite people come into the room. Breeding angelfish is relatively easy with a proper aquarium, though you should take care to introduce enough genetic diversity to prevent inbreeding.

Feeding: Avoid overfeeding, as they'll keep eating even when they're full, which will eventually lead to inactivity and premature death. A mixture of frozen, flaked and live food is best.

Tank Care: Keep the pH level of the water in the aquarium slightly acidic; in other words, around the 7.0 level or slightly lower. These fish thrive in warm water, ideally maintained at 80 degrees Fahrenheit.

Life Expectancy: A freshwater angelfish that's well cared for can live to be 10 years of age or older.